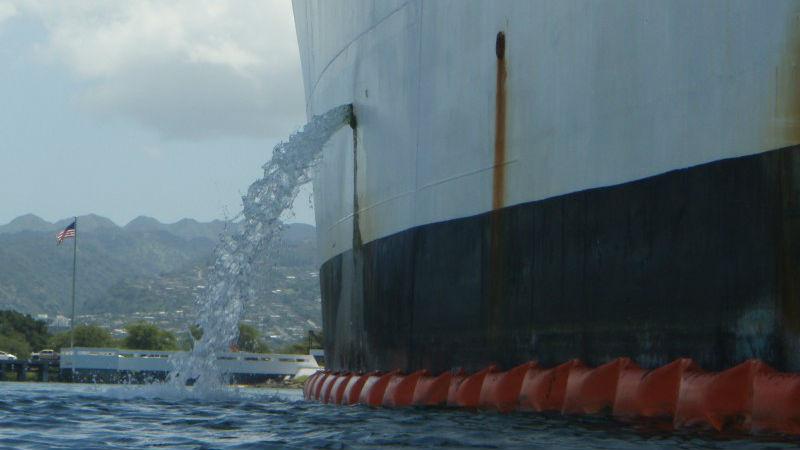 The IMO ballast water management convention testing program intended to prevent the spread of diseases in ships’ ballast water is a failure, according to a study released online by the peer-reviewed journal Marine Pollution Bulletin.

The new study reports that for the past ten years most of these tests have been run with test water that contained no target microbes, so that it was impossible for the treatment equipment to fail. According to Dr Andrew Cohen, the Director of the Center for Research on Aquatic Bioinvasions in the U.S. and the lead author of the study, “The equipment being tested would have passed the microbe tests even if it hadn’t been turned on.”

The study found that 95 percent of the tests conducted from 2004 to 2013 were invalid. In nearly two-thirds of the tests there were no detectable target microbes in the test water before treatment.

Because these tests were defective, they provided no information on the ability of the treatment systems to prevent the transport and release of bacteria that cause human disease. In fact, in some cases the treatment used may make things worse, says Cohen. By removing small organisms that eat bacteria, some treatment systems turned ballast tanks into bacteria incubators, so that the treated discharges consistently contained higher concentrations of bacteria, in some trials, thousands of times higher, than discharges that were left untreated. It is not known whether the increased bacteria included human pathogens.

The study found that new, effective test protocols are needed and that currently approved treatment systems will need to be re-tested. Since ballast discharge regulations have not yet gone into effect, this could be done without causing delays, but only if U.S. and international agencies act quickly to develop the protocols and require the new tests, says Cohen.

“Already at the time of writing of G8 guidelines, we did not intend for ballast water management systems to be thoroughly checked against bacteria the way the authors of the article want it to,” says Mouawad. “Indeed the ETV Protocol includes requirements to check such effect on a bench scale level only. Still, the effect on heterotrophic bacteria has been documented on land-based tests since it is more abundant than the others. For shipboard tests, my experience is that it is rare if at all possible to find bacteria at the concentration levels required. I cannot recall reviewing one test that included such high concentrations.”

Mouawad says there is a large underestimation of the amount of work and money needed to test a ballast water management system.

“Simply requesting re-testing of systems is easily laid down on paper, almost impossible to achieve in real life. The intention of the convention is to reduce the risk of invasion by harmful alien species, not eliminate it. Any hint to the fact that a ship should be sterile is a misunderstanding of the reality of ships and shipping.”

He says that test regimes can only be successful if they consider the use of the system in practice onboard ships, and not in a sterile lab. Having a “sterile-lab” approach to type approval for equipment that will be used to control the spread of invasive species onboard “not so sterile” ships is a misunderstanding of how marine equipment are developed and approved and how ships are built and operated.

“I believe the current approach of the G8 Guidelines and the USCG Regulations (although every regime can be improved with time and experience) is a good middle ground between the harsh reality of ships, the practical approach of engineering and the very specific requirements of biology”,says Mouawad.

However, Cohen remains concerned about the spread human pathogens by ballast water. In the 1990s ballast water introduced a strain of pandemic cholera into U.S. waters and contaminated fish and oysters, and probably introduced the strain into South America, where it killed over 10,000 people, he says. Outbreaks of cholera and some other bacterial diseases are associated with higher coastal water temperatures because the bacteria thrive in warmer waters. Climate change will likely increase the impact of whatever diseases are spread in ballast water.

“Since treatment is our main defense against spreading diseases in ballast water,” says Dr. Cohen, “failing to test the treatment equipment may have serious consequences”

Analyses of the bacteria found in ballast water have raised additional concerns. “Dozens of species of pathogenic bacteria have been identified in ballast water,” says Dr Fred Dobbs, a marine microbiologist at Old Dominion University and the co-author of the paper. “Our previous work showed that antibiotic-resistant bacteria are also found in ballast water. Since resistance genes can be transferred from one bacterium to another, putting pathogenic bacteria and resistant bacteria together in a ballast tank risks the creation of new and dangerous strains. If ballast treatment isn’t effective, these strains could be released into the environment.”

Treatment equipment is estimated to cost around $1 million per ship, and up to $8-12 million for some large ships. Globally, the shipping industry is expected to spend around $70 billion on ballast water treatment equipment over 10 years.

The article, “Failure of the Public Health Testing Program for Ballast Water Treatment Systems” was released as an Article In Press in Marine Pollution Bulletin.

LET US HELP YOU GET THE RIGHT INFORMATION!